Get Ready For Some Paintball

Get Ready For Some Paintball 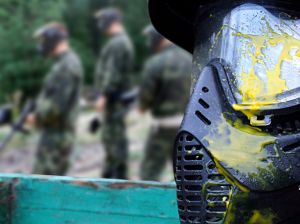 The origins of paintball began back in the 1950s when Charles Nelson developed a device for the Forestry Service to tag trees for their use in marking trees for cutting or clearing. Later on the invention was remodeled from one that squirt paint into one that shoots paint-filled pellets. These pellets were designed to break on impact, leaving a paint splat mark.

Looking to increase revenue for his company, Charles Nelson marketed the device to cattle herders who would use the paintballs to mark cattle. Ranchers would mark cattle to distinguish them from which ones that were to be sold, separated for inoculation, or artificial insemination, et cetera. Before then cattle ranchers would ride up alongside the cattle and mark them with chalk. As time went on uses for this invention would find its way to wildlife game managers, animal census takers, and for recreational purposes.

A paintball is a thin-skinned gelatin capsule with a colored paint inside. Paintballs are similar to a large vitamin capsule or bath oil beads and are non-toxic, biodegradable, water soluble and rinse off with water. When a paintball strikes a substrate, it leaves a brightly colored splat shaped mark that can easily be removed with water.

Old paintballs were made with oil-based paint which is toxic and harmful to people and the environment. As the evolution of the use of paintballs changed manufacturers used and continue to use non-toxic ingredients to manufacture paintballs.

Due to changing laws and regulations manufacturers of paintballs moved away from using oil based paint because of its toxicity. Manufacturers make non-toxic paint for paintballs by using a mixture that consists of Propylene Glycol, Polyethylene Glycol (Sorbitol), color dye, and sometimes wax.

Propylene Glycol is a clear, odorless, and edible organic compound with a high viscosity. Polyethylene Glycol (Sorbitol) is used for preventing the paint within the round shell of the paintball from drying out. Both these compounds are non-toxic and water soluble, so you don’t need to worry about personal or environmental safety. The color dye used is low grade and is similar to dye you would use in your house to dye eggs for example. Lastly sometimes wax is used to thicken the mixture of paint.

How Paintballs are Made

Modern paintballs are safe for both the environment and for one’s health. The paint is non-toxic so if you get it in your mouth and accidentally swallow it, it won’t affect you. The paint dissolves in water so it won’t remain on your clothes or all over the outdoors where you play. Also, the shells are biodegradable, too. The residual paint that is left on outdoor surfaces will wash away with water when it rains.

Paintball has grown into a recreational activity that is a combat simulated game that requires teamwork. The typical style of game play that paintball participants partake in is called Capture the Flag. Paintball game participants wear required safety gear to protect themselves from possible injuries such as being struck in the eye(s). The strategies that the game of paintball exhibits has led to companies, even those of the corporate level, to schedule sessions to help build team work and communication among colleagues.

Self cross-linking emulsion with good gloss for flexo and gravure printing. more info

Ottopol 523 is an anionic hydroxyl functional acrylic emulsion. The functionality allows the polymer to cross-link with melamine or aziridine. more info

What is Gravure Printing?

What is gravure printing? To understand rotogravure printing, a brief primer of intaglio is required. Intaglio is the process used in printing and printmaking in which an image is incised into a surface and where [...]

We use cookies to enhance your experience. By continuing to visit this site you agree to our use of cookies. Find out more
Accept
Read more